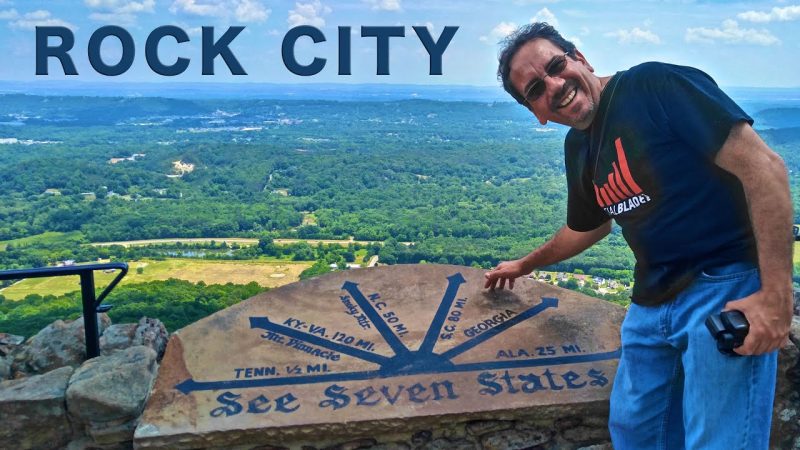 Great American Road Trip 2016 Part 2
On this week’s video we visit a famous roadside attraction near Chattanooga, Tennessee called Rock City. Rock city is located on the Georgia side of the border, on top of the Lookout Mountain Ridge.
Rock City became a tourist attraction back in the early 1930s, at the site of a community called Fairyland, founded by one Garnet Carter and his wife Frieda. These rock formations happened to be inside the Fairyland community, and it was Frieda’s idea to develop this part of the property into a great rock garden, with all kinds of plants, trails around the rocks, and statues of gnomes and other fairytale characters imported from Germany. They claim that you can see seven states from the top of the mountain: Tennessee, Kentucky, Virginia, North Carolina, South Carolina, Georgia and Alabama. While on a clear day you can see the Smoky Mountains, that’s still the Tennessee side. I don’t have hard evidence of this but I have read that Kentucky, Virginia, and South Carolina are below the horizon, so the only way you could see them is if the Earth was flat.

In Rock City we also enjoy the music of Matt Downer – Old Time Traveler, an Alabama native and Chattanooga resident. He plays the fiddle, the banjo, and the guitar, and he has dedicated his career to the preservation of traditional music. He has studied the repertoire and techniques of many of the elder Tennessee, Alabama, and Georgia musicians, so he is the real deal. What a treat it is to listen to his music.

As we continue towards Nashville we run into some trouble climbing the Cumberland Plateau , also known Monteagle Mountain. The car started overheating on the long 5% grade. While technically not a mountain, Monteagle got it’s popular culture name due to a Johnny Cash song describing this treacherous portion of the road.
#travelingrobert #rvlife #freeinmyrv