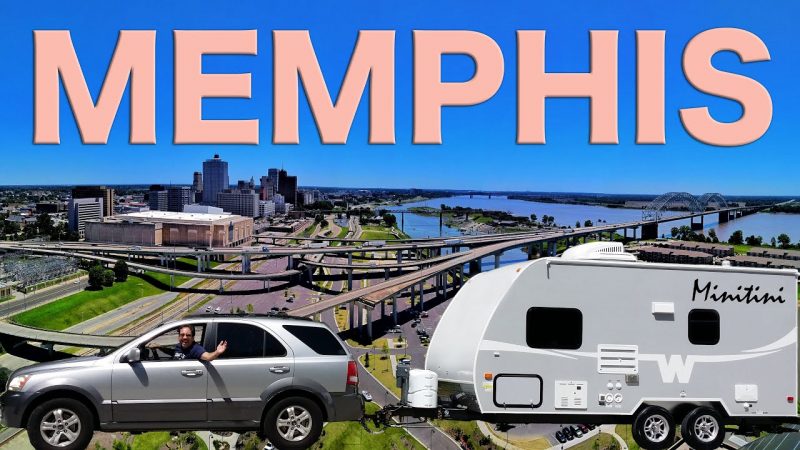 In this week’s video we visit Memphis Tennessee.
It is running of fumes that we arrive at Memphis, Tennessee; and I’m not talking about old Kia. It is us. It has been an intense whirlwind road trip for almost two weeks now, and we are really ready for a break that won’t come for another two days. I, however, am ecstatic to be staying here right next to the shore of the Mississippi. I have always been fascinated by this river mainly because of Mark Twain’s stories. I can almost imagine Jim and Huck’s raft coming downstream.
We ignore our fatigue and decide to explore downtown a little bit. We walk along the bank of the river enjoying a spectacular sunset. Then we walk towards historic Beale Street, which is lined up with bars, most of them featuring live music. It is a real shame we are not really in the mood for partying.
On the next day we go to the main tourist attraction in this town: Graceland. This was Elvis Presley’s home all the way from the 1950’s until the time of his death in 1977. Some of the room were redecorated for the tour, reflecting different eras in the life of the King of Rock and Roll. There’s also a whole building dedicated to the many awards he received as well as costumes and memorabilia. There is a meditation garden where Elvis, and well as other family members are laid to rest. Across the street there are two main attractions. One of them is the two jet planes Elvis Presley acquired in 1975. The other is the automobile museum, showcasing his extensive automobile collection.
After the museum we go to one of the most famous barbeque restaurants in Memphis: Central BBQ. While it is a tough comparison, I do believe the one in St. Louis was a little more tasty, but I could have taste bud fatigue at this point so don’t quote me on that.
Our last point of interest in the city is the Memphis Pyramid. It was originally conceived as an area, but something about the dimensions prevented it from becoming an NBA arena. After much financial distress, the property was leased by Bass Pro Shops, and they have built the largest over the top store. The highest freestanding elevator in the United States takes you to the top of the pyramid, where they have a restaurant and an observation deck.
We depart at sunset and spend the night in Tupelo, Mississippi, very close to Elvis Presley’s birthplace. In the morning we briefly visit the site, and then spend most of the day driving south towards the Florida panhandle.
#travelingrobert #rvlife #freeinmyrv