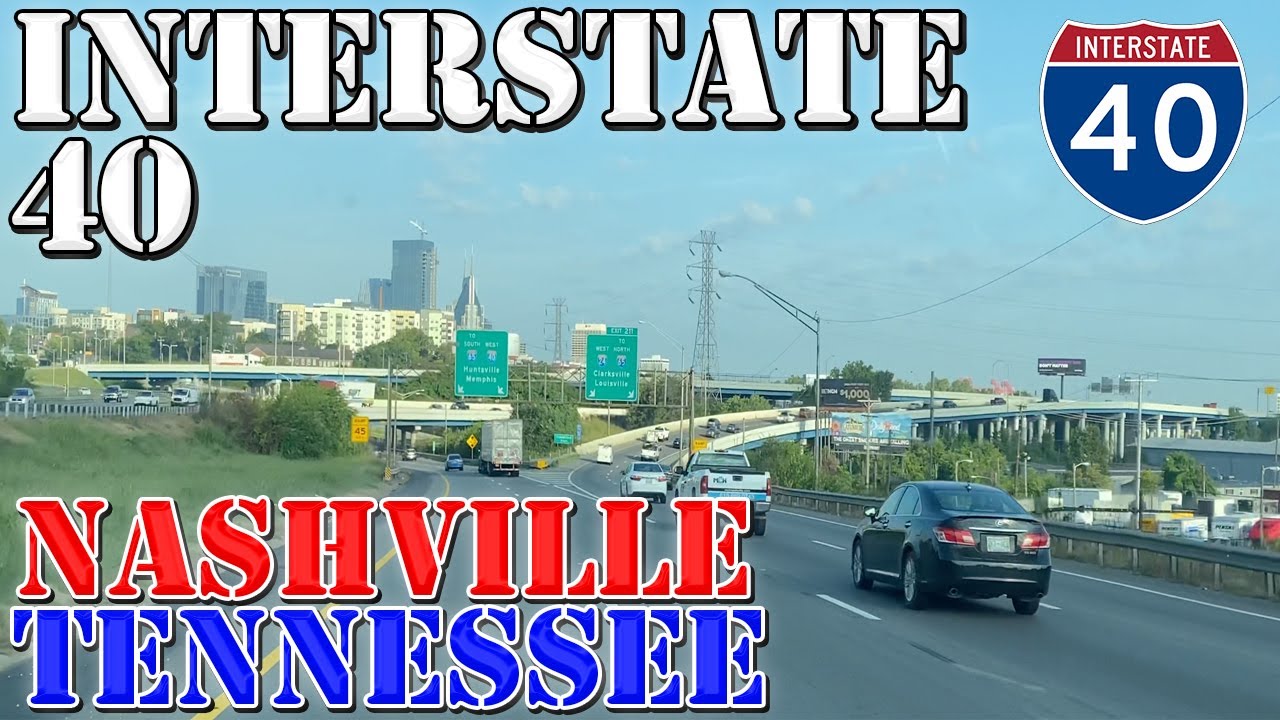 Interstate 40 westbound through the Nashville Metro Area. Video begins in Lebanon, TN and continues west past Downtown Nashville. Includes great views of the Nashville skyline from the east.
Filmed: September 2021

From Wikipedia:
Around milepost 191, I-40 enters Davidson County, and a few miles later crosses the Harpeth River for a third time. About one mile (1.6 km) later, near Bellevue, I-40 widens to six lanes, entering the urban outskirts of Nashville, and has an interchange with US 70S. Three miles (4.8 km) later is an exit with SR 251 (Old Hickory Boulevard), and two miles (3.2 km) later is an interchange with US 70 (Charlotte Avenue). I-40 then widens to eight lanes, and three miles (4.8 km) has an interchange with SR 155 (Briley Pkwy, White Bridge Road), which includes the western terminus of the northern controlled-access beltway around Nashville. About two miles (3.2 km) later is the western terminus of I-440, the southern loop around central Nashville.

Two miles (3.2 km) later, I-40 enters downtown Nashville, and begins a brief concurrency with I-65, turning southeast. As part of the route around downtown Nashville known locally as the Downtown Loop, the two concurrent routes have interchanges with US 70 (Charlotte Avenue) and US 70S/US 431 (Broadway), as well as two surface streets, Church Street and Demonbreun Street. About two miles (3.2 km) later the two concurrent routes turn east northeast, and I-65 splits off and heads south. Briefly independent for about one mile (1.6 km), I-40 crosses a long viaduct, and has an interchange with US 31A/US 41A (4th Avenue, 2nd Avenue), before beginning a brief concurrency with I-24 and turning southeast. About two miles (3.2 km) later, I-24 splits off to the southeast, and I-40 turns east. The eastern terminus of I-440 is also directly accessible from the eastbound lanes of I-40 at this interchange, and US 41, which crosses I-24 before this interchange, is also directly accessible from I-40 at this interchange.