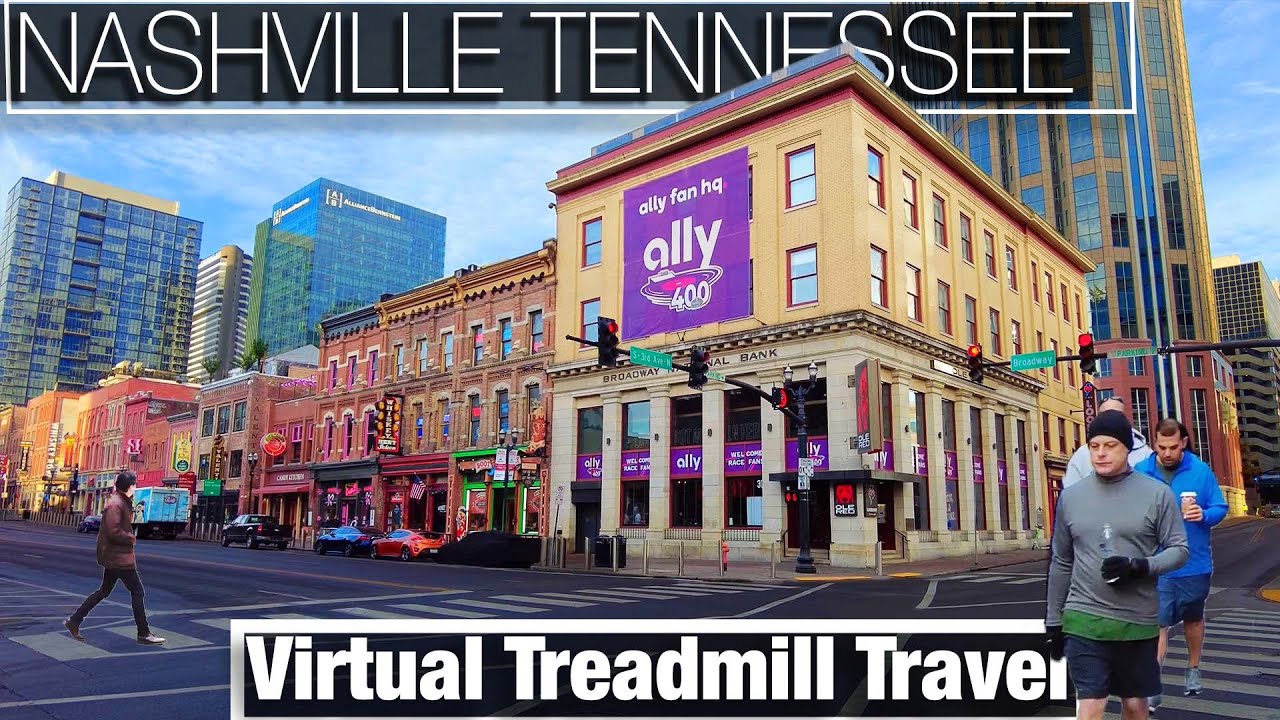 #walkingtour #CityWalks #virtualwalk #treadmillworkout #treadmillscenery #virtualtreadmill
Who hasn’t heard of Nashville? It’s the heart of country music but so much more. Party town, Music City, and full of history, museums, art, pro sports, and also the capital of TN! We get an early start on this walk, once again, because I love watching the cities wake up. To fully do it justice, I should go back and film at night. That will have to be next time. This city represents another great mix of old and new buildings. Sports, entertainment, and art. So many great restaurants there. I also saw folks out working as community ambassadors with info for visitors. I hope you enjoy this morning virtual treadmill walk through Nashville, TN

Last year, a disturbed man blew himself up and injured eight others. I didn’t realize that the buildings being worked on near the end of the walk were on the back side of where the bomb was detonated. My condolences go out to all who were injured in that crime. https://en.wikipedia.org/wiki/2020_Nashville_bombing

My Story: I’m a filmmaker by trade. In 2016, we sold our house to go traveling for the year in Europe. Since I couldn’t work there, I decided to start another Youtube Channel. I love walking as a way to explore and this was an easy thing to share. It got popular and I’ve continued. My goal is to share these treadmill travel videos to help your work out with virtual walks.
Instagram: @citywalks_virtualtravel
Facebook: https://www.facebook.com/MyCityWalks
Twitter: @walks_city

You might be interested in our other Channels:
CityWalks360 – 360 VR walking videos: tinyurl.com/yg5dkewu
TravelingMel – FamilyTravel – https://youtube.com/TravelingMel
Nature Relaxation Therapy -http://tinyurl.com/y3h93tvl

Named for Francis Nash, a general of the Continental Army during the American Revolutionary War, the city was founded in 1779. The city grew quickly due to its strategic location as a port on the Cumberland River and, in the 19th century, a railroad center. Nashville seceded with Tennessee during the American Civil War; in 1862 it was the first state capital in the Confederacy to fall to Union troops. After the war, the city reclaimed its position and developed a manufacturing base.
A major center for the music industry, especially country music, Nashville is commonly known as “Music City”
In 1689, French-Canadian trader Martin Chartier established a trading post on the Cumberland River, near the present-day site of the city. In 1714, a group of French traders under the command of Charles Charleville established a settlement and trading post at the present location of downtown Nashville, which became known as French Lick. These settlers quickly established an extensive fur trading network with the local Native Americans, but by the 1740s the settlement had largely been abandoned
…Before the Civil War, about 700 free Blacks lived in small enclaves in northern Nashville while there were over 3,200 Black slaves in the city. By 1860, when the first rumblings of secession began to be heard across the South, antebellum Nashville was a prosperous city. The city’s significance as a shipping port and rail center made it a desirable prize for competing military forces that wanted to control the region’s important river and railroad transportation routes. In February 1862, Nashville became the first Confederate state capital to fall to Union troops, and the state was occupied by Union troops for the duration of the war. …

Virtual treadmill walk video – #virtualtreadmill #virtualwalk #citywalks
These videos are great for treadmill walking scenery. Getting good health at the gym while traveling to different and special virtual locations.
We provide Treadmill scenery youtube and virtual walking trails. Virtual walks for treadmill can be a great way to pass the time.

If you like walking treadmill videos or treadmill trail videos, this is a great channel to subscribe to. We have dozens of treadmill workout video and treadmill walking video to choose from. We do both nature trails and virtual hiking trails. We hope you enjoy these walking tours for treadmill from around the world.