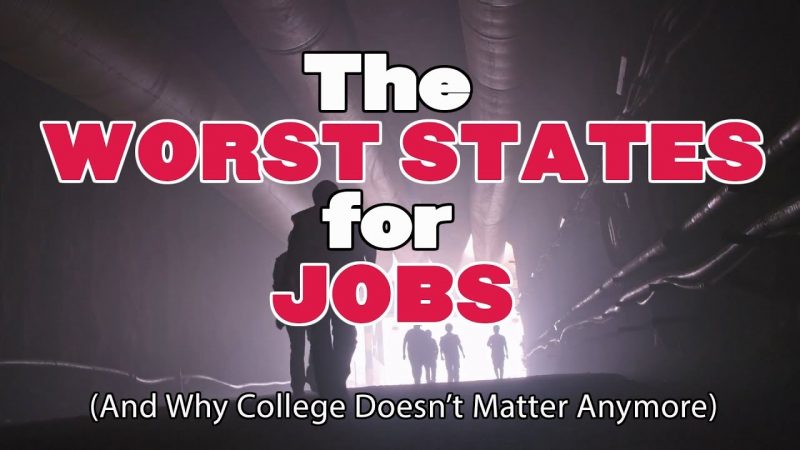 Are ya out of work? If so, you’re in the minority. If you’ve been paying attention, only 3 and a half percent of the population is unemployed right now. That’s the lowest it’s been in the last 50 years.

And there’s plenty of jobs out there, too. Lots of companies can’t hire enough people, especially in blue collar industries like trucking and construction, in technology, and in high level health care.

If you don’t have a job now and you’re looking, it shouldn’t be long until you get one. If you’ve been out of work for a long time, you’re likely lazy. Except for very special circumstances.

So, the economy is booming and companies can’t grow fast enough to keep up with demand. But of course, there’s gonna be some states where the job scene is the worst. Not always terrible, but someone has to finish last right?

In Oregon, the unemployment rate is currently 4.1% the 12th highest in the nation. But, we factored in more than just the current snapshot of the job situation to cast a wider picture.

We also measured job growth over the past year. There are 12 states with negative job growth right now, and three where job growth is zero. Oregon is one of those three.

No surprises that West Virginia is towards the bottom when it comes to jobs. The Mountain State’s 4.7% unemployment rate is the 5th worst in the country, but West Virginia’s job growth has been steady, growing at .4%, which is actually the 6th highest rate in the US. That gives West Virginia a job quotient score of 4.3.

Now lets compare that to our best state for jobs in the USA, Colorado, which has a 2.7% unemployment rate and a .8% job growth rate for a job quotient of 1.9. The state with the lowest unemployment rate is Vermont, where only 2.2% of the population is out of work.

New Jersey and Alabama are tied with Colorado with the best current job growth rates.

Here in Kentucky, the unemployment rate is 4.4% which is the 7th highest rate, and the job growth is -.1%.

Like other states, Kentucky’s job gains came in health care, education and manufacturing, and the state saw job losses in mining and logging, as the US is slowly moving towards cleaner energy like natural gas.

North Carolina has a 4.1% unemployment rate, which is the 12th worst, but the Tar Heel state saw it’s job sector shrink by .4%, which is the 3rd highest rate of job losses in the nation.

In Michigan, the numbers are very similar to those in North Carolina. A 4.2% unemployment rate and a -.3% job growth rate, resulting in a job quotient of 4.5.

Michigan has lost 6,000 jobs in manufacturing. Some people have said that a trade war with China is part of the problem. Other states like Pennsylvania and Wisconsin have seen similar dips in manufacturing jobs.

Of course, the auto industry is a big deal in Michigan. But slowing sales and rising inventories are leading to slight production cuts and job losses. Basically, people are buying less cars lately.

In Washington, the unemployment rate is 4.6%, the 6th highest in the nation. And the job rate has shrunk by -.2% in the last year.

The state of Washington saw a net loss of 1,600 jobs in the last reporting month. The largest job growth was in retail, technology and construction. Manufacturing jobs are down here, too, but unlike other states we’ve seen, Washington lost jobs in education and healthcare.

Here in the state of Arizona, the unemployment rate is really low at 4.9%, but the job growth rate is climbing. Over the last year, Arizona did add a net 27,000 jobs, which is about average.

Here in New Mexico, the unemployment rate is tied with Arizona at 4.9%. However, unlike Arizona, which is making strides, New Mexico’s job growth rate was essentially zero.

So that means 1 in 20 people is out of work, and will likely remain out of work for the foreseeable future.

Next up is Alaska, which has the nation’s highest unemployment rate at 6.2%. That’s almost twice the national average.

There are a few reasons for Alaska’s high jobless rate. Alaska has a lot of seasonal jobs that only happen in the summer. This includes tourism, commercial fishing, and firefighting.

However, on the bright side, the job growth rate here is .3%, so that’s promising.

Here in the Magnolia State, the unemployment rate is a little better than Alaska, at 5.5%. However, Mississippi has seen a -.5% job decline in the last year, the worst in the nation.

This channel talks about America, different states, education, travel, geography and what it’s like to live in different places in America.

Mappy: [email protected] He’ll do his best to answer your questions and fan mail.

More info on The 10 WORST STATES for JOBS