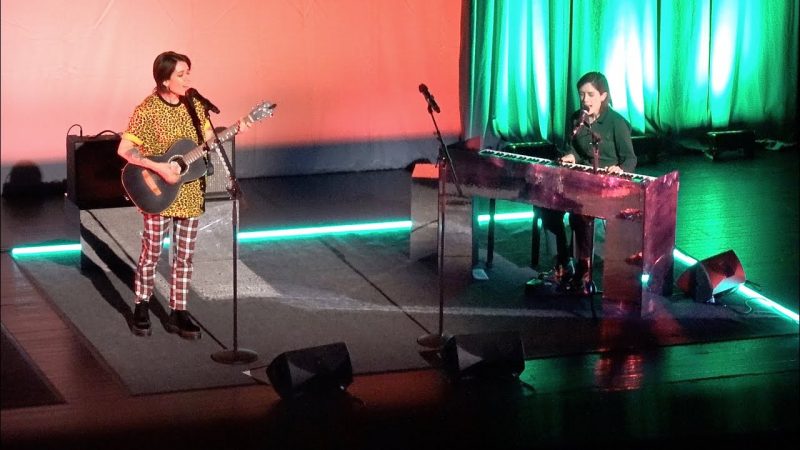 Tegan And Sara play their new song “You Go Away And I Don’t Mind” live in concert at the Sydney Goldstein Theater in San Francisco, California on October 1, 2019. The song appears on their new album, Hey, I’m Just Like You, which contains new versions of songs they wrote during high school. The album coincides with their “High School” memoir about the same time period.

This tour is going to be like nothing we have ever done. We’ll be solo (can we still call it “solo” if there are two of us?). We’ll be playing acoustic (mostly). We’ll be reading from our memoir High School, and performing songs from the new album Hey, I’m Just Like You. And we’ll be playing a collection of songs from our older records (don’t worry!). We’ve pulled our favorite moments from all the old video footage from our teenage years we discovered last year, and we will be screening clips throughout the evening. We have so much in store for you. It’s going to be a super special evening that you don’t want to miss. We’ve been away from you all for nearly two years and can’t wait to see you.

You Go Away And I Don’t Mind lyrics

I’m complicated, I was raised by icons
Touched by saints, still powerless
Scared and lost, cursed like novelty
Crushed and cracked, I’m powerless

Instamatic, embraced by millions
A slow reaction hits my blood
If I get famous, inflamed by gravity
Pretend to notice, kiss my spills

Tegan And Sara have have received three Juno Awards, a Grammy nomination, and a Governor General’s Performing Arts Award (Canada’s highest national honor in the arts). In 2016 they created the Tegan and Sara Foundation, which fights for health, economic justice, and representation for LGBTQ+ girls and women.