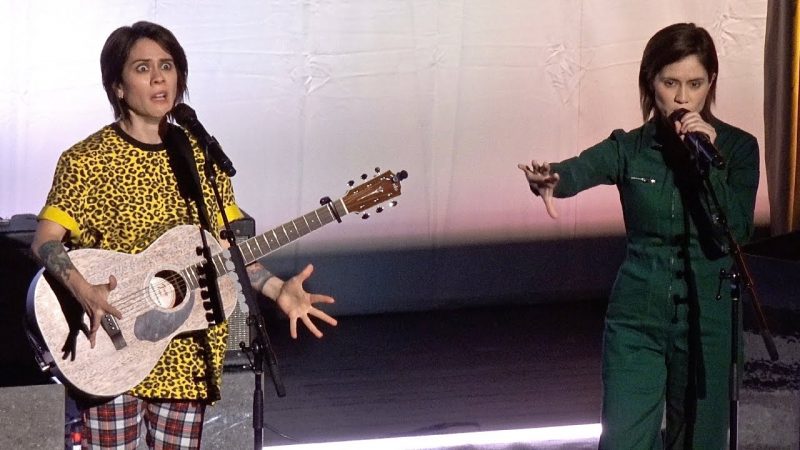 Tegan And Sara play their new song “Hey, I’m Just Like You” live in concert at the Sydney Goldstein Theater in San Francisco, California on October 1, 2019. The song is the title track from their new album, which contains new versions of songs they wrote during high school. The album coincides with their “High School” memoir about the same time period.

Stranded and I’m so lost, my mind is wired
Overcome and overdone, my fate is on fire
Eat the drugs and dance to screaming in my head
I’m so happy that we’re friends, me and you

I never feel invisible when you’re around
With you, I don’t blend in with the millions
Together in the light, I swear all for you
Tonight in the dark, we’re seeing colors

Sometimes, we get so tired of pretending like you’re so strong
Everyone you love has gone and decided that you’re so wrong

I always feel invincible when you’re around
You and me against the millions
Together in the light, I swear all for you
Tonight in the dark, we’re seeing colors

During the course of their twenty-year career, Tegan and Sara Quin have sold well over one million records and released eight studio albums. Tegan And Sara have have received three Juno Awards, a Grammy nomination, and a Governor General’s Performing Arts Award (Canada’s highest national honor in the arts). They have performed on some of the world’s biggest stages, from Coachella to the Academy Awards. In 2016 they created the Tegan and Sara Foundation, which fights for health, economic justice, and representation for LGBTQ+ girls and women. The sisters currently reside in Vancouver, British Columbia, and split their time between there and Los Angeles, California.