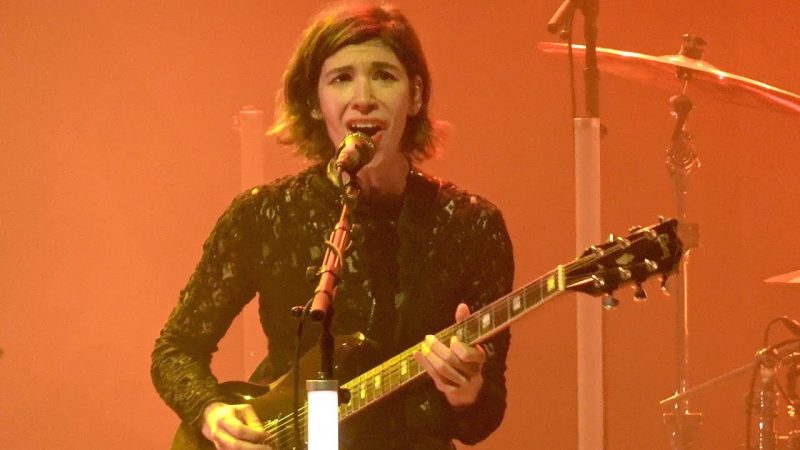 Sleater-Kinney play their song “Modern Girl” live in concert during their encore set at the Fox Theater in Oakland, California on November 16, 2019. Modern Girl was originally released on the band’s seventh studio album, The Woods (2005). Sleater Kinney are Carrie Brownstein (guitar and vocals) and Corin Tucker (guitar and vocals). Joining them onstage were Katie Harkin (guitar and keyboards), Angie Boylan (drums), and Toko Yasuda (keyboards and pianica).

Sleater-Kinney’s The Center Won’t Hold is the first new album from the celebrated band since their 2015 album, No Cities To Love, available August 16 on Mom + Pop. After years of legendary collaboration, rock’n’roll giants Carrie Brownstein (guitar/vocals) and Corin Tucker (guitar/vocals) sound bigger and bolder than ever. The new album was produced by Annie Clark (St. Vincent), and hailed by The Fader as “one of the most furious, dynamic records of their career.” The New York Times called them “one of rock’s most enduring and respected acts” and Rolling Stone gave the record 4 stars and raved, “one of America’s greatest bands does battle with modern apathy on thrilling LP.”

Sleater-Kinney set a new bar for punk’s political insight and emotional impact. Now, at the height of their formidable powers, the feminist icons continue to challenge themselves, break all the rules and push boundaries. This new creative chapter in the acclaimed band’s musical journey is poised to win over both longtime admirers and new fans alike.

My baby loves me, I’m so happy
Happy makes me a modern girl
Took my money and bought a TV
TV brings me closer to the world

My baby loves me, I’m so hungry
Hunger makes me a modern girl
Took my money and bought a donut
The hole’s the size of this entire world

My baby loves me, I’m so angry
Anger makes me a modern girl
Took my money, I couldn’t buy nothin’
I’m sick of this brave new world