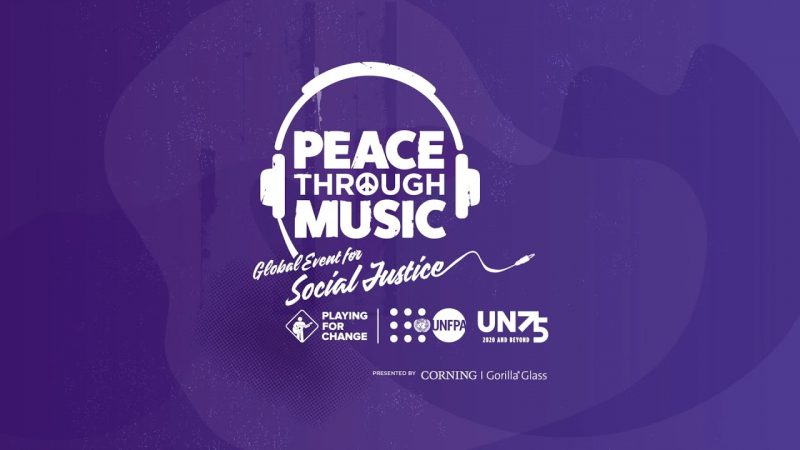 In honor of the United Nations’ 75th anniversary and Human Rights Day, this global virtual event aims to showcase the interconnectedness of humanity and activate the world to stand up for and champion the full protection and promotion of human rights for all, especially those in the most vulnerable communities.

Contributions from partners and all donations will support the Playing For Change Foundation, the United Nations Population Fund, the United Nations Remember Slavery Programme, Sankofa, The Bob Marley Foundation, Silkroad, and The Rock & Roll Hall of Fame Foundation – organizations that strive to eradicate poverty, inequality, and systemic racial and gender discrimination around the world.

PRESENTED BY CORNING® GORILLA® GLASS
Corning Gorilla Glass launched in 2007. Since its inception, Gorilla Glass has become the glass of choice for mobile consumer electronics manufacturers around the globe. The patented, durable glass technology has been designed into more than 8 billion consumer electronic devices by more than 45 major OEMs. Formed through Corning’s proprietary fusion draw process and strengthened through an ion-exchange process, Corning Gorilla Glass continues to deliver industry-leading performance and durability with a thin, pristine surface that is ideal for the mobile consumer electronics industry as well as automotive applications.

SPECIAL THANKS TO OUR PARTNERS IN MAKING CHANGE:
Gibson, the world’s most iconic guitar brand, has shaped the sounds of generations of musicians and music lovers across genres for more than 100 years. Founded in 1894 and headquartered in Nashville, TN, with a premiere acoustic facility in Bozeman, MT, Gibson Brands has a legacy of world-class craftsmanship, legendary music partnerships, and progressive product evolution that is unrivaled among musical instrument companies. The Gibson Brands portfolio includes Gibson, the number one guitar brand, as well as many of the most beloved and recognizable music brands, including Epiphone, Kramer, Steinberger, and the Gibson Pro Audio Division, KRK Music. Gibson Brands is dedicated to quality, innovation, and sound excellence so that music lovers for generations to come will continue to experience music shaped by Gibson Brands. Learn more at https://Gibson.com

ABOUT EPIPHONE
For over 140 years, Epiphone has been a leading innovator in instrument design with models like the Casino, the Texan, and Masterbilt Century Archtop Collection. Epiphone began as the “House of Stathopoulo” family business in Sparta in the 1870s and rose to fame during the jazz age in Manhattan before joining Gibson brands in 1957. Today, Epiphone continues to make history from its headquarters in Nashville, TN. Epiphones have powered classic recordings by Les Paul, The Beatles, and The Rolling Stones along with today’s top artists like Peter Frampton, Gary Clark Jr., Tommy Thayer of KISS, and Lzzy Hale. Epiphone offers innovation, history, and a lifetime guarantee. Whether you are learning your first song in your bedroom, or rocking an arena, Epiphone has always been there, for everyone, for every generation, for every stage.