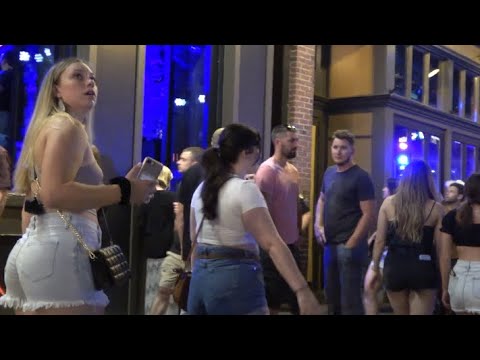 Hello all My name is Pierre.
This is how Nashville Tennessee Lower Broadway streets looks like tonight August 6 2021 walking on this Friday night with the camcorder in this video thats why its not stable sorryyy
summer time baby
welcome to the channel if you new. And I love you if you are a regular here.

My personal instagram is zoemanpierre
I am monetize but not all my videos can be monetize because of all the music here in Nashville that be in the video due to copyrights . So please whatever you can donate please donate at my venmo
venmo is @pierre-3 or cashapp
Cashapp $zpierre509.
Also please share this in your social media. ( Facebook, Twitter, Reddit , etc.)

If you looking for a wedding videographer / photographer my wedding website is pierre509.com
Hello Nashville Tennessee fans/friends . I love you guys you guys are great . No matter how good a video is if no one watches it , it doesn’t mean nothing.

SPECIAL THANKS TO THE FOLLOWING REGULAR VIEWERS THANK YOU SO MUCH
MING FOSTER
UNCLE JOE
HIHI6666HIHITTT
TROY VINEYARD
NASHVILLE SCANNER
J.E.S. PRODUCTIONS
AUSTIN LOPEZ
KLEVAR526
I honestly love doing Nashville vlogs. Thank You all you guys motivate me to keep making videos.
This is how Nashville Tennessee downtown Broadway streets looks like on a Friday and Saturday night every weekend
Nashville Tennessee downtown Broadway
Nashville Tn downtown Broadway 2021
Broadway Nashville Tennessee
Broadway Nashville ZPierre509
Fifth and Broadway Nashville Tennessee
5th and Broadway Nashville Tn
#nashvilletnbroadway #broadwaynashville #nashvilletenneseebroadway Broadway is a major thoroughfare in the downtown area in Nashville, Tennessee. It includes Lower Broadway, an entertainment district renowned for honky tonks and live country music. The street is also home to retail shops, restaurants, dessert spots, tourist attractions, and a few hotels.
Originally named Broad Street,[1] the eastern end of Broadway ended at the shipping docks on the Cumberland River. It was one of the first roads to run east-west in Nashville, and the first public high school in the city was built on the road in 1875. It eventually became a street lined with hardware stores, feed stores, and various other businesses and had a section known as “Auto Row” at the beginning of the 20th century due to large numbers of car dealers and tire and auto shops. A new post office – now the Frist Center for the Visual Performing Arts – was built next to Union Station on Broadway by the Works Progress Administration (WPA) during the Great Depression.[1]