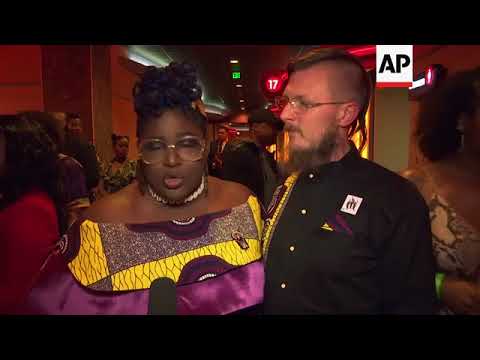 (16 Feb 2018)
RESTRICTION SUMMARY:
FILM CLIPS ARE CLEARED FOR MEDIA BROADCAST AND/OR INTERNET USE IN CONJUNCTION WITH THIS STORY ONLY.  NO RE-SALE. NO ARCHIVE.
COMMERCIAL MUSIC, MUSIC VIDEO AND OR PERFORMANCES, MUST BE CLEARED ACCORDING TO YOUR OWN LOCAL MUSIC PERFORMANCE AND COPYRIGHT AGREEMENTS WITH YOUR APPLICABLE COLLECTING SOCIETY.
ASSOCIATED PRESS
Nashville, Tennessee. 15 February 2018
1. Wide of movie theater interior
2. Tight on “Black Panther” showtimes
3. Wide of drummers in movie theater
4. SOUNDBITE (English) Maxine Holt Donaldson/”Black Panther” Fan:
“I thought it was very important to bring my teenage son to see the atmosphere and have the actual experience of this movie, with showing all the positive roles of African Americans and some of the Africans in this movie. So I thought that was very important heritage-wise. And it’s Black History Month, as well.”
5. Tilt down on “Black Panther” display
6. SOUNDBITE (English) Machael Donaldson/”Black Panther” Fan:
“Yes, it really has been something for me looking forward to. Because, as a child I have been into geeky nerdy things and everything. And with sci-fi, and I love that African American heroines get to be portrayed this way.”
7. Six year old Carson Bailey in Black Panther costume posing on the carpet
8. Wide of Elisheba Marozik posing in her dress on the carpet
9. SOUNDBITE (English) Elisheba Mrozik/”Black Panther” Fan-Tattoo Artist:
“I got it made in Nigeria, especially for February, ‘Black Panther,’ and our art immersion thta we’re having on the 24th with ‘Black Panther’ art. Anyway we can celebrate, look awesome and do it in fabrics from the motherland.”
Aaron Marozik/”Black Panther” Fan:
“That’s how we’ll do it.”
Marozik: “Yes.”
10. Medium of drummers in movie theater
11. SOUNDBITE (English) Elisheba Mrozik/”Black Panther” Fan-Tattoo Artist:
“We’re excited because we get representation in a film that’s not about slavery, that’s not about trials and tribulations, but about a powerful African empire, which is where we come from in the first place — that, you know, is doing awesome things with strong characters of darker complexions: Nobody is mixed. Somebody that looks like me is a superhero and nobody is whitewashing it. And it’s beautiful.”
12. Six year old Carson Bailey in Black Panther costume posing on the carpet
13. Wide of women dancing to drummers in movie theater
14. SOUNDBITE (English) Latarsher White/”Black Panther” Fan:
“Um, I am just excited it’s a African American, well, an African superhero. I am excited ’cause the Dora Milaje are so awesome and they kick butt. Girl power. And I am excited they are painting Africa in a different light than what we normally see. So it’s just a big moment.”
15. Wide of family dressed up on carpet
16. SOUNDBITE (English) Latarsher White/”Black Panther” Fan:
“But, aside from that, it’s just an opportunity to explore those regal roots, and to know that some of us do come from royalty. It’s bigger than just what we see every day and what’s represented. So it’s just connecting to your heritage and that royal lineage to a degree. And so it’s always good to play dress up.”
17. Pull out out on woman posing for pictures
18. SOUNDBITE (English) Kermit El-Amin/”Black Panther” Fan:
19. Wide of Bulli Carter walking and posing on the carpet
20. SOUNDBITE (English) Zachary Ford/”Black Panther” Fan:
“Like everybody has a James Bond or they have a Lara Croft, but to have a Black Panther whose got a bulletproof suit, he really can’t get hurt, and he’s a great man, aw, yeah, that’s something I can look up to. So I like him.”
21. Wide of man showing off his African vest
22. Tight on Black Panther showtime
STORYLINE:
NASHVILLE FANS GET REGAL FOR ‘BLACK PANTHER’ OPENING