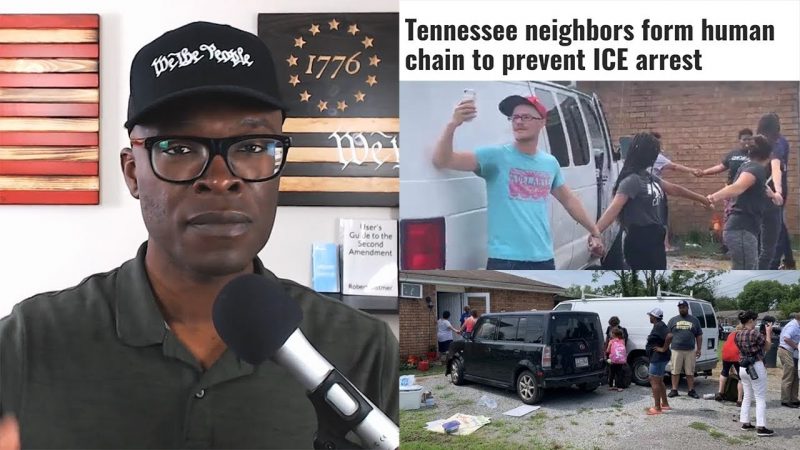 Residents in Hermitage, Tennessee, formed a human chain around their neighbor’s van to help protect him from Immigration and Customs Enforcement (ICE) agents who were trying to take him into custody.

The man was sitting in his van with his 12-year-old son when an ICE vehicle blocked him in his driveway, CBS affiliate WTVF-TV reports. With no way out, the man and his son sat in the car for hours, resulting in a standoff with ICE agents who did not have legal authority to remove them by force.

Neighbors began to check on the man and his son as they sat in the driveway. “We made sure they had water, they had food, we put gas back in the vehicle when they were getting low just to make sure they were OK,” neighbor Felishadae Young told WTVF-TV. A crowd gathered and several people videotaped the standoff on their phones.

👕 Order your shirts here: https://teespring.com/stores/abl-gear
📲 Tip me though PayPal: https://www.paypal.me/ablogan
📲 Sponsor me on Patreon: https://www.patreon.com/anthonyblogan
🌐 Visit my website: http://www.anthonyblogan.com
💬 Connect with us on Discord: https://discord.gg/JVdp9gu

Neighbors form human chain to protect father as ICE tries to take him into custody
https://www.cbsnews.com/news/nashville-neighbors-form-human-chain-to-protect-father-as-ice-tries-to-bring-him-into-custody/?ftag=CNM-00-10aab7e&linkId=71006653

‘They Came to the Wrong Community’: Neighbors Form Human Chain to Stop ICE From Arresting Longtime Nashville Resident
“We stuck together like neighbors are supposed to do.”
https://www.commondreams.org/news/2019/07/23/they-came-wrong-community-neighbors-form-human-chain-stop-ice-arresting-longtime