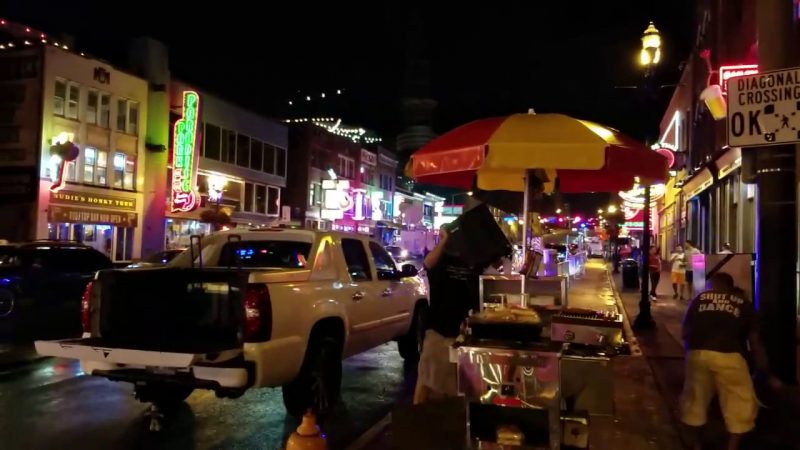 Visiting downtown Nashville at night! It’s something out of the ordinary if you have never visited! It’s like a little Las Vegas Strip, but instead of casinos, country music bars line this one high street 24 hours a day!

Nashville is the capital and most populous city of the U.S. state of Tennessee. The city is the county seat of Davidson County and is located on the Cumberland River. The city’s population ranks 24th in the U.S. According to 2017 estimates from the U.S. Census Bureau, the total consolidated city-county population stood at 691,243. The “balance” population, which excludes semi-independent municipalities within Davidson County, was 667,560 in 2017.Located in northern Middle Tennessee, Nashville is the main core of the largest metropolitan area in Tennessee. The 2017 population of the entire 13-county Nashville metropolitan area (known colloquially as “The Mid-State”) was 1,903,045. The 2015 population of the Nashville—Davidson–Murfreesboro–Columbia combined statistical area, a larger trade area, was 2,027,489.Named for Francis Nash, a general of the Continental Army during the American Revolutionary War, the city was founded in 1779. The city grew quickly due to its strategic location as a port and railroad center. Nashville seceded with Tennessee during the American Civil War and in 1862 became the first state capital to fall to Union troops. After the war the city reclaimed its position and developed a manufacturing base.

Since 1963, Nashville has had a consolidated city-county government, which includes six smaller municipalities in a two-tier system. The city is governed by a mayor, a vice-mayor, and a 40-member metropolitan council; 35 of the members are elected from single-member districts, while the other five are elected at-large. Reflecting the city’s position in state government, Nashville is home to the Tennessee Supreme Court’s courthouse for Middle Tennessee.

Nashville is a center for the music, healthcare, publishing, private prison, banking and transportation industries, and is home to numerous colleges and universities such as Tennessee State University, Vanderbilt University, Belmont University, Fisk University, and Lipscomb University. Entities with a large presence or headquarters in the city include AT&T, Bridgestone, CoreCivic, Hospital Corporation of America, LifeWay Christian Resources, AllianceBernstein, Logan’s Roadhouse, Ryman Hospitality Properties, the Southern Baptist Convention, and the National Baptist Convention.

Video File Created Date: 21 September 2017 (Video may or may not have been captured on this date, it shows the date the video was last converted.)