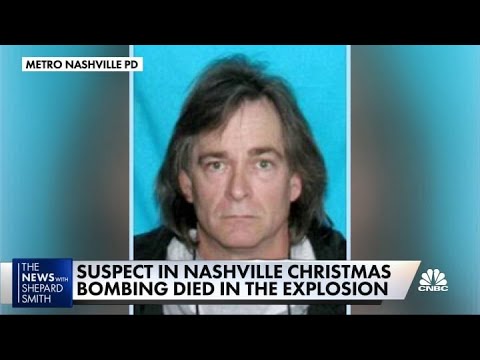 NBC News correspondent Morgan Chesky reports on the latest details from the Christmas Day bombing in Nashville. The motive for the explosion remains unknown. For access to live and exclusive video from CNBC subscribe to CNBC PRO: https://cnb.cx/2NGeIvi

Authorities on Sunday identified Anthony Quinn Warner as the man behind a Christmas Day bombing that rocked downtown Nashville. Warner died in the explosion, officials said.

“Based on the evidence that we’ve gathered to this point, we’ve come to the conclusion that an individual named Anthony Warner is the bomber,” U.S. Attorney Don Cochran said during a press conference. “He was present when the bomb went off, and he perished in the bombing.”

Federal and state investigators have yet to disclose a potential motive and. Warner allegedly set off a bomb inside a recreational vehicle Friday morning, injuring three people and damaging more than 40 businesses.

Authorities determined that Warner, 63, was the bomber after an analysis of DNA evidence found at the scene, police said.

Douglas Korneski, the special agent in charge of the Federal Bureau of Investigation’s Memphis Field Office, said at the press conference that Warner is believed to be solely responsible for the explosion.

Korneski said that authorities reviewed hours of surveillance footage of the area surrounding the recreational vehicle before it exploded.

“We saw no other people involved around that vehicle,” Korneski said. “We are still following leads, but right now there is no indication that any other persons were involved.”

According to the FBI, the RV arrived in the area shortly after 1 a.m. local time, and the explosion occurred around 6:30 a.m. The vehicle blared a warning to evacuate the area prior to the blast. It also played the song “Downtown” by Petula Clark.

Authorities said at this point they have not classified the bombing as an act of domestic terrorism, noting that designation requires the act to be tied to an ideology. The characterization may change as more information becomes known.

Federal agents are examining a number of potential leads and pursuing several theories, including the possibility that an AT&T building was targeted. The bomb caused damage that affected communications in several states.

AT&T said earlier Sunday it has been rerouting service to other facilities as the company works to restore the damaged building.

The damage caused communications outages not only in Tennessee but in states including Kentucky, Alabama and Georgia.

Turn to CNBC TV for the latest stock market news and analysis. From market futures to live price updates CNBC is the leader in business news worldwide.