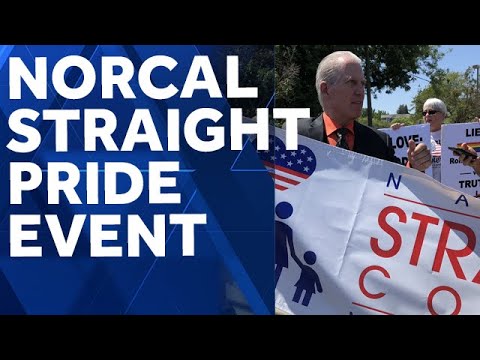 A straight pride demonstration took place in front of a Modesto Planned Parenthood and was met with protests.

The group, which calls itself the California Straight Pride Coalition, assembled on McHenry Avenue on Saturday afternoon with approximately 20-30 people.

Some held signs in support of President Donald Trump and his policies, such as a border wall, while other signs shared Bible verses and asked God to forgive the nation and its citizens.

Don Grundmann, the coalition’s director, said the group believes that “the LGBT community is trying to destroy America by destroying the culture.”

The demonstration occurred after the group failed to obtain liability insurance and a permit from the city of Modesto for a straight pride parade, which it billed as the first of its kind in the nation.

Prior to the demonstration, Grundmann said his group held a separate meeting at a different venue featuring speakers, including the Rev. Jesse Lee Peterson. Grundmann, citing security concerns, wouldn’t disclose where that event was held.

“There’s an agenda, I’ll say, in the public square against Christianity in general, so this all goes together for us,” Mylinda Mason said.

In the lead-up to the demonstration, more than 100 members of the LGBTQ community and their supporters joined together at Enslen Park to counter the coalition’s message.

“I want to celebrate each and every ally,” James Varble said into a microphone before those in attendance.

She recalled what it meant to be a young lesbian in the late 1970s.

“If you’ve never been afraid to walk down the street holding the hand of a person you love, then you might not need a parade just for you on that day,” she said. “But for a lot of people who have feared their safety, a lot of people who have been assaulted for simply loving who they love, to have a place of inclusion and acceptance is incredibly important.”

Eventually, many of the counterprotesters from Enslen Park walked to the straight pride demonstration, where they confronted the coalition and chanted things like, “No hate, no fear. Straight pride is not welcome here.”

The two sides also argued more than hour over the coalition’s message, Trump, his policies and his reelection bid. Modesto police estimated the crowd at 200 people, most of whom came from Enslen Park.

Police could be seen at both venues on foot, on horseback and riding bicycles.

Sgt. Kalani Souza said they were there to ensure everyone’s right to free speech. They were also looking items recently banned at protests by the Modesto City Council.

“Items we’re looking for are signs that are not soft in nature. We’re looking for any types of weapons, aerosol sprays, masks that may be covering the face. If it’s not on for religious or medical reasons, then we are asking people to remove those,” he said. “And before arrests are made, we are gaining compliance through education.”

Modesto police issued no citations and made no arrests Saturday.