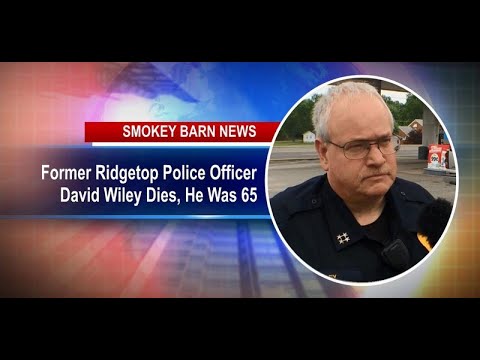 Back in 2015, Smokey Barn News interviewed (at the time) Assistant Police Chief David Wiley moments after he ran down an armed robbery suspect and took him into custody. We have added the interview to this report.

“David Wiley was a completely dedicated Police officer for the city for 20 years. He served as our chief on two occasions. He did pretty much anything we needed him to do. He was completely dedicated to the citizens and residents of Ridgetop and loved officers in the department. He will be dearly missed by a lot of people including family and friends and law-enforcement professionals throughout the area. He had a good reputation and a big heart,” former Ridgetop Mayor Darrell Denton

The family will receive friends from 5 pm to 7 pm on Monday, December 16, 2019, at Highland Chapel Union Church with a memorial service following at 7 pm at the church with Bro. Jon Briggs and Bro. Ralph Carter officiating.

David was born in Nashville, TN of October 3, 1954 to Revis Odell Wiley and the late Peggy Ann Webb Greer. He was also preceded in death by brothers, Gary and Jeffrey Wiley.

David was retired as an officer with the Ridgetop Police Department. He loved taking care of the safety and wellbeing of those in the community. The children of Watauga School loved him as much as he loved them. He loved his children and grandchildren and was a member of Highland Chapel Union Church.