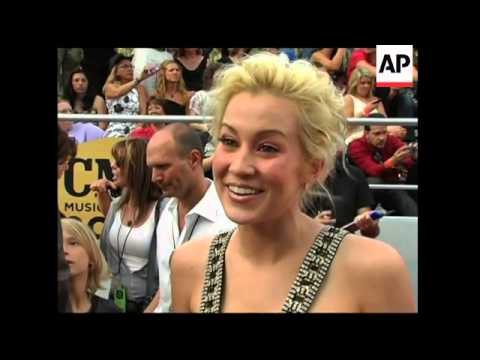 (18 Jun 2009) SHOTLIST
AP Television
Nashville, Tenn., 16 June 2009
1. Wide arrivals area 2009 CMT Music Awards
2. Photographers
3. Fashion shot: Sugarland’s Jennifer Nettles
4. Musician Chuck Wicks interviews Sugarland
5. Mid-shot of Camera operator
6. SOUNDBITE (English) Jennifer Nettles/Musician, Sugarland:
“Rachel Roy, I love the way she cuts. I love the way her designs work on a woman’s body.”
Kristian Bush/Musician, Sugarland:
“You look beautiful tonight, you actually do.”
Nettles: “Thank you! He’s sweet.”
Bush: “I haven’t told her yet, but she does.”
Reporter: “Women need to hear this…”
Nettles: “They do.”
Bush: “Well, you have to pick the right time. Mind you, it has to be the right time.”
Nettles: “Yes, and this is a great time to do it.”
7. Fashion shot: Heidi Newfield
8. SOUNDBITE (English) Heidi Newfield/Musician:
“Actually, this one is a little bit more laid back. This one is really fun. Like I found a really fun piece, it’s easy. Throw the boots on, throw the dress on — well, this is more like a shirt than a dress — but you know it’s really the hair and makeup that take a little bit longer. Everything else, this is a little bit more rock and roll, a little more laid back and fun.”
9. Closeup camera operator, with pull out to reveal musician T-Pain posing for photographers
10. Fashion shot: T-Pain
11. Fashion shot: Taylor Swift
12. Fashion shot: Julianne Hough
13. SOUNDBITE (English) Julianne Hough/Musician:
“Patti Packham and she’s awesome. She is so feminine and sweet and I don’t know, I love that. This is so fun because you can wear something short and a little bit more fun, it doesn’t have to be all glitz and glam. So it’s fun.”
14. Wide musician Emily West posing for photographers
15. SOUNDBITE (English) Emily West/Musician:
“I actually had a sit-down conversation with a friend of mine who said, ‘You know, you have a loud mouth on you. You need to try being the jean and T-shirt girl because you’re so big, your personality is so big, you don’t need to try.’ And I go, ‘My personality is in my clothes, you know, and if they have a hard time with it, then whatever, then don’t buy my record!’ No, I’m kidding. Just buy it! but I’m sorry, I’m just gaudy.”
16. Fashion shot: Kellie Pickler
17. SOUNDBITE (English) Kellie Pickler/Musician:
“I’m wearing Badgely Mischka and I’m in love with it. I’m very, very blessed to be able to wear their dress.”
18. Fashion shot: Jessica Harp
19. SOUNDBITE (English) Jessica Harp/Musician:
“Sienna Miller is the only other person to have worn these earrings, so I feel like maybe some good luck is rubbing off with these earrings tonight.”
20. Closeup earrings
21. Fashion shot: Martina McBride
22. SOUNDBITE (English) Martina McBride:
“This is Cheri O’Dell and I love it because, I don’t know, I love the color. I don’t really normally wear this color very much and I just thought it was very chic and kind of glamorous.”
23. Fashion shot: Sarah Buxton
24. Closeup purse
25. SOUNDBITE (English) Sarah Buxton:
“Well, this was the dress I was supposed to wear to the CMAs. The zipper broke, unfortunately, so I had to wear a dress that, I don’t know, hopefully no one saw that, but this was the one I was supposed to wear, so I figured since I still had it in my closet and I hadn’t worn it to anything, because I don’t just wear this out, these dresses I wear to special occasions and this is a special occasion.”
26. Little Big Town poses for photographers
27. SOUNDBITE (English) Little Big Town:Phillip Sweet (blond), Kimberly Schlapman (blond), Karen Fairchild, Jimi Westbrook:
Westbrook: “You don’t want me doing this. (Points to Fairchild) Alexander Wang. (looks at Schlapman) Who?”
Fairchild: “Halston.”
Schlapman: “I just told him that!”
STORYLINE