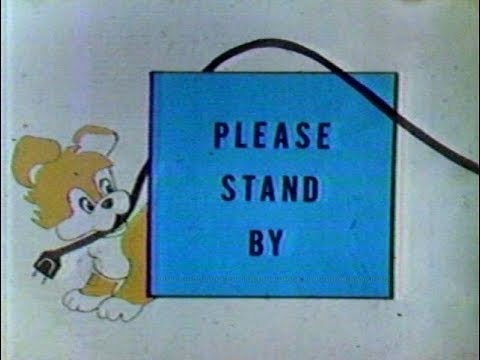 Feed URL: ”https://www.bing.com/news/search?q=WZTV not valid and removed from fetch.

Here’s a technical-difficulty moment that plagued WZTV Channel 17 in Nashville, Tennessee during the airing of the I Dream of Jeannie episode “Nobody Loves a Fat Astronaut” (originally aired on the NBC network on March 17th 1969) with Barbara Eden as both the title character and her evil sister, Jeannie II.

Sound going off on episode 19 seconds into this clip, after brief sprocket sound from 16mm film projector (once again a bit of fortuitous synchronicity as to the timing of the sound going out – reminiscent of this clip where a tornado warning was immediately preceded by huge gusts of wind on film – https://www.youtube.com/watch?v=3Pd0PjQmjso )

“Please Stand By” slide, with a drawing of a dog holding onto a cord with his mouth (Can’t get more perfect than this, can you? This and similar slides (I am presuming stations from around the country had) were parodied memorably on The Simpsons.
( http://www.mundosimpson.com.ar/imagenes/technical/3f04.jpg )

Commercial: Kellogg’s Corny-Snaps cereal, with Shelly the Turtle (voiced by Arnold Stang) in Zorro outfit, signing with an “S” (an example of this box can be found here: http://theimaginaryworld.com/box295.jpg ) – “There’s Fun in Your Good Breakfast”

Back to episode, with sound being a bit wobbly at the start (to tell you the truth it wasn’t that great during almost the entire episode)

Station Historical Note: This airing fell nearly one year and five months after WZTV (now a FOX affiliate) took to the air on March 6th 1976, after having been dark for the previous five years following the end of the prior station to occupy the Channel 17 frequency, WMCV, which had signed-on August 17th 1968.

This aired on local Nashville TV on Thursday, August 4th 1977 during the 5:00pm to 5:30pm timeframe. (Not from Chicago, but still of historical interest.)