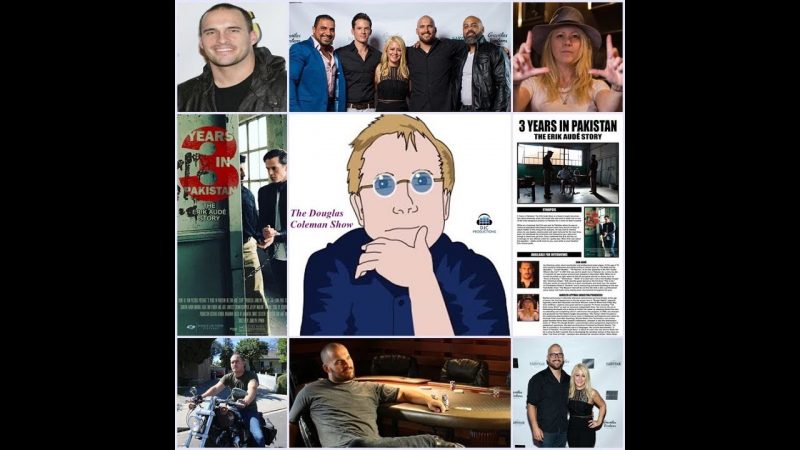 3 Years in Pakistan:
The Erik Audé Story is a feature length documentary about American actor, Erik Audé who was sent to death row in one of the most dangerous prisons in Pakistan for a crime he didn’t commit. While on a business trip Erik was sent to Pakistan where he was arrested at Islamabad International Airport when they found 3.6 kilos of opium hidden in the lining of his suitcase. He was sent to remand where he was beaten, electrocuted and water tortured for the next three days. He maintained his innocence and refused to cop a plea even though it meant less jail time. Once confirmed that Erik did this unknowingly he was offered a deal for a guilty plea. When Erik was asked the question: ‘ whats worth more to you, your pride or your freedom’ Erik choose pride.

Erik Audé is an American actor, stunt coordinator and professional poker player. He was born in Los Angeles, Ca and raised in the Antelope Val- ley, Erik was a high school football player setting a California State Record for the most tackles by a defensive end at 147. At the age of 18 Erik moved to Hollywood and started acting in shows such as “The Bold and the Beautiful”, “Cousin Skeeter” & “7th Heaven” he also appeared in the film “Dude! Where’s My Car?” In 2001 Erik was sent to death row in Pakistan for a crime he didn’t commit. He was proven innocent and released in December 2004. When he returned he picked up right where he left off and guest starred on shows such as “Sons of Anarchy”, “Shameless” & “NCIS” he also had a role in the Bradley Cooper film “American Sniper”. Erik recently guest starred on the hit show “This is Us”. Erik also works on several films as a stunt coordinator and stunt- man, he worked on Christopher Nolan’s “Dunkirk” and is reoccurring and stunt doubling on the new Kurt Sutter show “The Mayans” that will be out this Fall. Erik is also a professional poker player and hosts many charity poker tournaments throughout the year.

Jamielyn Lippman has been passionate about filmmaking and storytelling since childhood. Raised in Valencia, CA, she started performing in nationally televised commercials and local theater at the age of seven. After graduating high school, Lippman headed to Hollywood to pursue her dreams. Her first appearance on the big screen was in “Boogie Nights” opposite legendary talent Burt Reynolds and Oscar Winners Julianne Moore and Philip Seymour Hoffman. Lippman also guest starred in popular TV shows including “The Drew Carey Show” as well as numerous independent films. Her love for the art of filmmaking developed into a desire to further her career by stepping behind the camera. In 2001, Lippman attended LACC’s well-known film program. After successful completion of her film school training, Lippman spent the next few years writing, directing and producing dozens of short films as well as penning numerous feature-length screenplays. In 2006, she directed and produced her first feature-length documentary, “Die Trying” which focused on the underlying determination to be an actor in Hollywood and featured such talent as Amanda Fuller (Last Man Standing), Michael Biehn (The Terminator), and scream queen Danielle Harris (Rob Zombie’s Halloween).

If you’re interested in being a sponsor on The Douglas Coleman Show, please check out our packages on Patreon or contact us directly.

OR if you’d prefer to make a one-time donation, please check out our GoFundMe.