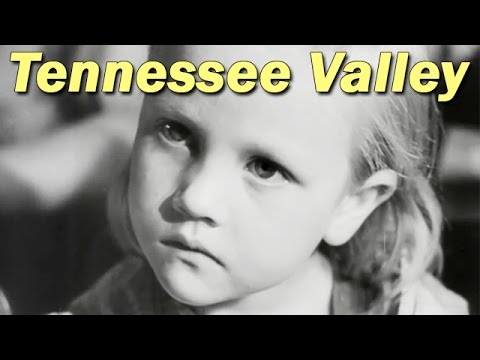 This short film – originally titled as ‘The Valley of the Tennessee’ – is a 1944 documentary produced by the U.S. Office of War Information. The film shows the hardships of agriculture before the Tennessee Valley Authority (TVA) came in and built many dams in the 1930s and 1940s to help prevent the problems of flooding, erosion, and poor irrigation. Before the TVA built its many dams there were a lot of farms, houses, and lives lost due to flooding. With the building of the dams and educating of the farmers in the Tennessee River Valley, the TVA helped better the area for generations to come. The film documents the origins and construction of the Tennessee Valley Authority and its effect on the people of the valley.

The film includes footage of President Franklin D. Roosevelt speaking on the importance of the TVA for water control and hydroelectric power. It contains scenes of the various dams’ construction and shows TVA specialists teaching local farmers new techniques.

The film was narrated by Fredric March. The music is outstanding. The entire production is a masterpiece of film-making at its very best. A must see film!

The Tennessee Valley Authority (TVA) is a federally owned corporation in the United States created by congressional charter on May 18, 1933 to provide navigation, flood control, electricity generation, fertilizer manufacturing, and economic development to the Tennessee Valley, a region particularly affected by the Great Depression. The enterprise was a result of the efforts of Senator George W. Norris of Nebraska. TVA was envisioned not only as a provider, but also as a regional economic development agency that would use federal experts and electricity to rapidly modernize the region’s economy and society.

TVA’s service area covers most of Tennessee, portions of Alabama, Mississippi, and Kentucky, and small slices of Georgia, North Carolina, and Virginia. It was the first large regional planning agency of the federal government and remains the largest. Under the leadership of David Lilienthal (“Mr. TVA”), TVA became a model for America’s governmental efforts to seek in assisting the modernization of agrarian societies in the developing world.

NOTE: THE VIDEO REPRESENTS HISTORY. SINCE IT WAS PRODUCED DECADES AGO, IT HAS HISTORICAL VALUES AND CAN BE CONSIDERED AS A VALUABLE HISTORICAL DOCUMENT. THE VIDEO HAS BEEN UPLOADED WITH EDUCATIONAL PURPOSES. ITS TOPIC IS REPRESENTED WITHIN HISTORICAL CONTEXT. THE VIDEO DOES NOT CONTAIN SENSITIVE SCENES AT ALL!

Life in the Tennessee Valley in the 1930s - BingNews Search results