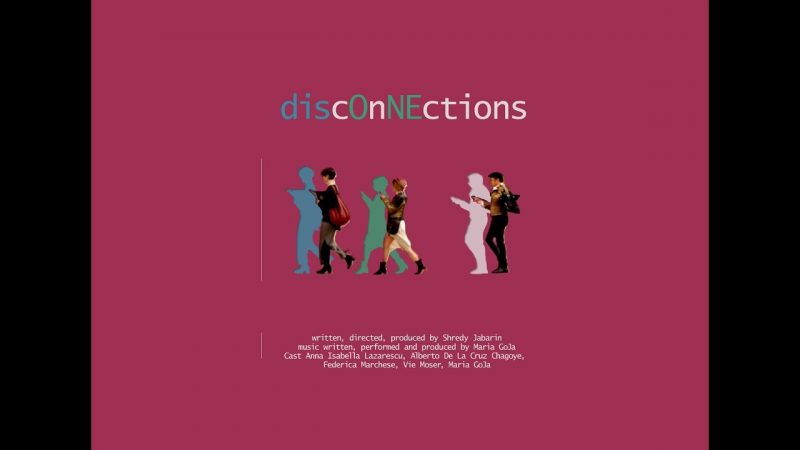 Disconnection – a short film written, directed and produced by Shredy Jabarin in 2014
Created with my acting students who finished the year acting course.

it’s about the lifestyle in the new western world. It is based on on experiences of artists in Berlin. A story of five young artists/aspiring artists in Berlin, their everyday struggle with personal interactions, their longing for recognition and quick success in the Berlin art scene. Those young Berlin artists look for success only through networking and throw professional contacts and connections, not through competence and growth.
By reaching out to connections through social media networks, they create more loneliness and disconnection in a world in which, they belief, people can’t make their way to success, unless they connect to the relevant people at the right place in the right time.
Disempowered by this belief, they start to focus on “connections” only. Instead of investing in their skills and talents by learning with supportive teachers, they reach out to those that gained their position through family and friends connections, those that replaced competence and skills themselves.
While three of those five characters chase their unfulfilled dreams in social media networks and promising workshops, the real content, quality and authenticity fall behind, until the alienation process creates a wall around them. The other two characters in the meanwhile find themselves in a subtle awakening process and begin to see behind the facades of reality and social structures. As they overcome their naivety, their hope to live in a corruption free society one day, starts to grow…
Cast
Anna Isabella Lazarescu, Federica Marchese, Maria GoJa, Alberto de la Cruz, Vie Moser
Music by MariaGoJa.com
Written, Directed and Produced by Shredy Jabarin 2015