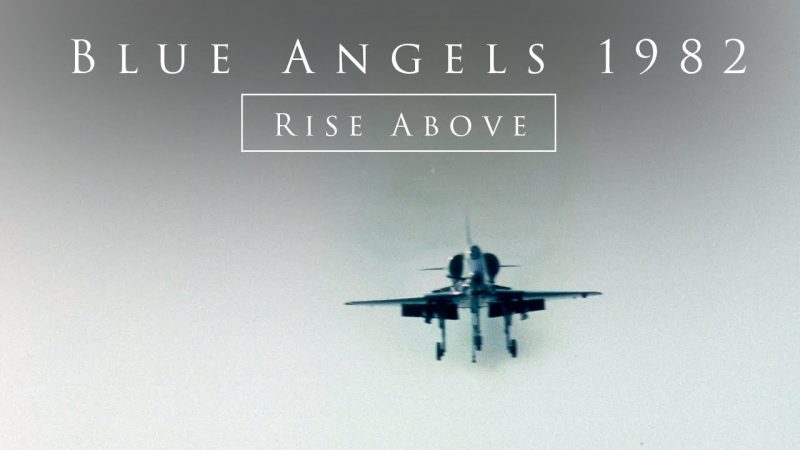 36 years after their inception, the Blue Angels set out to have an iconic 1982 air show season, including a historic return to Hawaii. Yet the aviation community would be rocked by immense tragedy during winter training of that year when the Air Force Thunderbirds lost four pilots in what is known as the “Diamond Crash”. Only weeks later, the Blue Angels suffered their own loss when lead solo pilot Stu Powrie’s plane crashed in the desert of El Centro, California.

With their future uncertain in the weeks that followed, the Blue Angels regrouped and turned to one of their former pilots, Jim “Jungle” Ross, to fill shoes of their fallen brother.

Delaying by only one week, the Blue Angels eventually embarked on their season that saw them perform over 80 air shows at sites across America including NAS New Orleans, Nashville TN, Greenville SC, Dayton OH, Salinas CA, Seattle WA, and Barbers Point HI. Despite their rigorous schedule, the Blue Angels never canceled an air show due to maintenance. This was in large part due to Blue Angels maintenance team, which is considered to be made up of some of the best mechanical and technical representatives in the Navy.

That doesn’t mean there weren’t hiccups along the way, but as you’ll learn in this documentary, the Blue Angels have a “never give up” attitude and do anything it takes to get the job done, and done well.

Today, the Blue Angels are now 74 years old and carry an incredible legacy that continues to endure the test of time. Known as “ambassadors of goodwill”, they’ve performed in front of hundreds of millions of spectators as they continue their mission of attracting talented and qualified individuals to join the US Navy and Marine Corps. Such a legacy is no doubt a tribute to the culture and pursuit of excellence that each team has strived to achieve since their inception in 1946.

The 1982 team documented in this short film exemplifies this culture and it was an honor to capture their story of perseverance and pursuit of excellence in executing their mission while inspiring millions around the globe.

This film is dedicated to the memory of Stu Powrie.

Historic stock footage & pictures featured in the documentary were provided by the personal collection of the Blue Angel pilots.