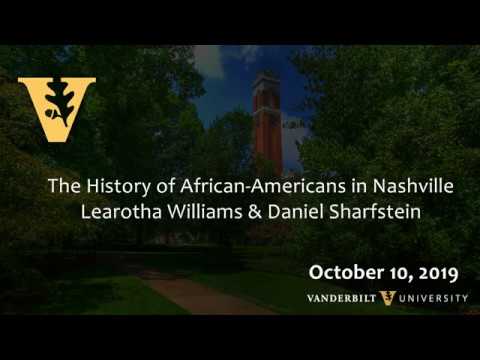 Watch video of the first presentation in the Osher Lifelong Learning Insititute at Vanderbilt series, The History of African Americans in Nashville ¬ which took place on October 10. . The History of African Americans in Nashville explores the black experience in the city from its founding and settlement in 1779 to the end of the modern civil rights movement. The course will document the lives of the city’s enslaved and free people of color as well as the cultural, religious, and educational institutions that they built. The course will also consider how black men and women in Nashville defined freedom and equality in the nineteenth and twentieth centuries and developed and sustained protest movements starting before the Civil War. Finally, we will pay close attention to the ways this history has been recovered, celebrated, contested, and erased from the city’s public memory.