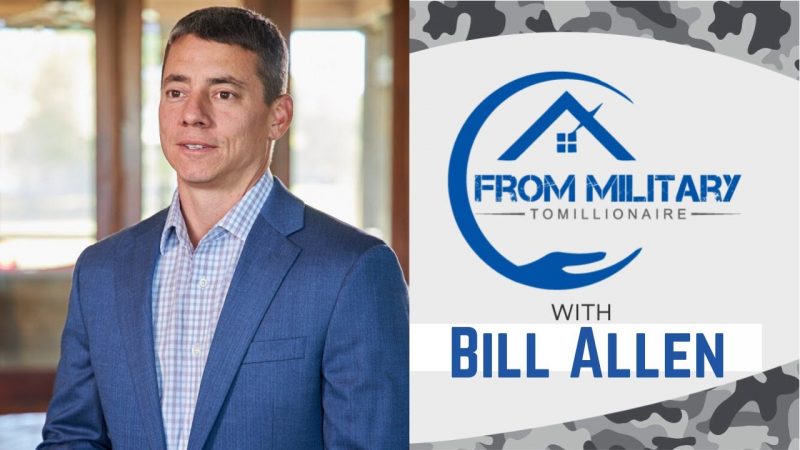 Veterans REI Live: https://www.eventbrite.com/e/veterans-rei-virtual-event-tickets-96521601709?aff=DavidPere
Bill Allen, a Navy pilot and real estate professional, is the CEO and owner of 7 Figure Flipping, where he leads the top house flipping and wholesaling mentoring groups in the nation. Just a few years ago, he was stuck flipping 1 or 2 houses per year and doing all the work himself, but since then, he’s built a systematized business that runs without him and has begun showing other investors how to do the same. In 2019, after running mastermind groups and events as the COO, Bill purchased the training and development company, House Flipping HQ.

In 2007, as an accidental landlord, Bill fell into real estate investing when he was deployed overseas and forced to leave his primary residence in San Diego. He was once again deployed from his home in Pensacola, FL in 2011. Upon his return from abroad and with marriage in his future, Bill worked on a plan to fully retire in his early 40’s. He started buying rental homes but quickly realized that he was running out of money quicker than he was building passive income to. That’s when Bill turned to house flipping to build the capital required to purchase more rentals.

Bill founded Blackjack Real Estate, LLC in 2015 with the mission of helping homeowners sell their homes for cash. The company started in Pensacola, FL and over time has expanded to Chattanooga and Nashville, TN and Huntsville, AL. Its strategic business plan allows them to remain incredibly fair with cash offers while still remaining profitable and creating valuable partnerships with local contractors, real estate professionals, and wholesalers. Based out of Nashville, TN, Bill and his team currently flip and wholesale 200+ deals per year in Tennessee and northern Florida. What began as a one-man operation has quickly become a team of 12+ members who are experts in their fields and passionate about real estate and helping others.

Bill’s journey in real estate has built his knowledge and expertise in raising private money, self-directed IRAs and 401k’s as well as private and hard money lending. If you would like to get in touch with Bill, please visit: www.7figureflipping.com, www.blackjackre.com or on Facebook at www.facebook.com/billallenrei

In this episode we talk about utilizing YouTube and content marketing to grow your sphere of influence, taking over 7-figure flipping, and continuing to grow his businesses. We also talk about the incredible event Veterans REI Live!

Advice to an 18-20-year old: Get your financial house in order first, read The Millionaire Next Door!

Recommended resource(s): Read the book that you need for where you are in life currently!

My name is David Pere, I am an active duty Marine, and have realized that service members and the working class use the phrase “I don’t get paid enough” entirely too often. The reality is that most often our financial situation is self-inflicted. After having success with real estate investing, I started From Military to Millionaire to teach personal finance and real estate investing to service members and the working class. As a result, I have helped many of my readers increase their savings gap, and increase their chances of achieving financial freedom! – Click here to SUBSCRIBE: https://bit.ly/2Q3EvfE to the channel for more awesome videos!

THIS SITE IS INDEPENDENTLY OWNED AND OPERATED. ALL OPINIONS EXPRESSED HEREIN ARE MY OWN. THE VIEWS EXPRESSED ON THIS SITE ARE THOSE OF THE AUTHOR OR THE AUTHOR’S INVITED GUEST POSTERS, AND MAY NOT REFLECT THE VIEWS OF THE US GOVERNMENT, THE DEPARTMENT OF DEFENSE, OR THE UNITED STATES MARINE CORPS.